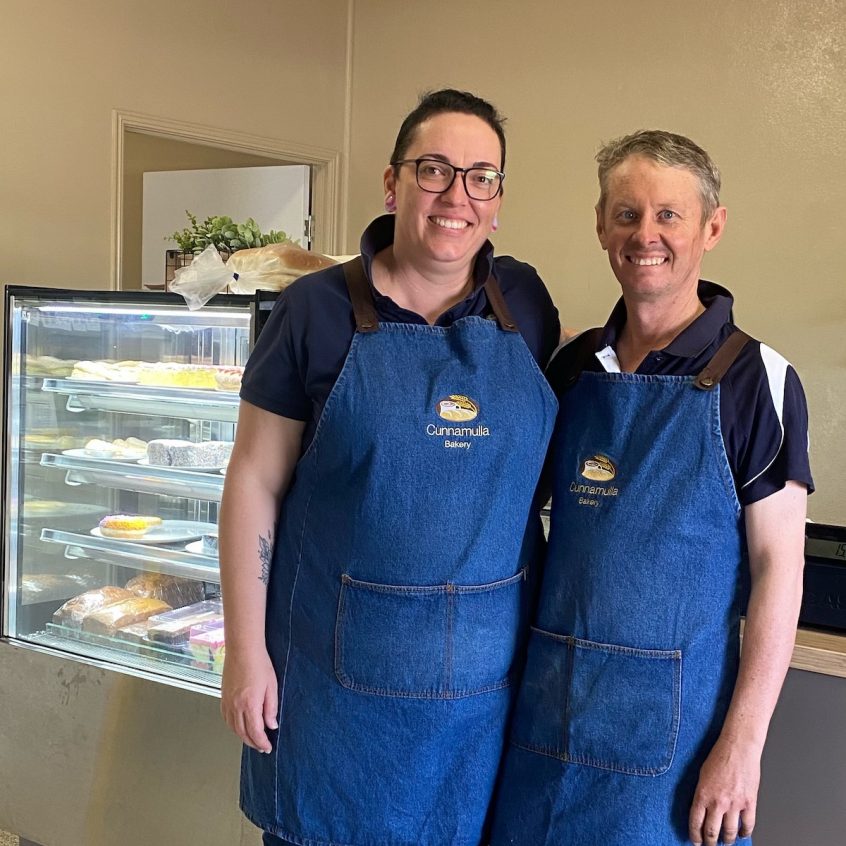 Nick and Kate Land, won the inaugural Welcoming Cities Awards for Change in the individual category. Nick and Kate own the Cunnamulla Bakery located in the Paroo Shire in outback South West Queensland.

Over the years they have found it difficult to attract and retain staff. However, a few small changes have made a huge difference. Welcoming Cities spoke to Nick Land about how he and Kate ensure staff working in their family-owned bakery in Cunnamulla feel a sense of belonging.

Welcoming Cities: Cunnamulla is in the outback. Can you tell me about the difficulties in recruiting staff to a rural town?

Nick Land: That’s been our biggest problem. That’s why we’ve gone the way of helping people with visas and immigration. The business has been going exceptionally well, but we’ve always been held back and hamstrung by not having the proper people. Just getting labour in general has been a problem for most areas of the business. We had a couple

of backpackers a couple of years ago – they’d travelled from halfway around the world and they had a great work ethic. They wanted to help the business expand.

WC: Sounds like this was the beginning of a more inclusive approach. What have you done to support your staff members?

is the food. Their diet is totally different. I’ve got suppliers that we get our fruit and veg from. I get bok choy – stuff that you can probably buy in the city – well there’s not enough call for it out here, so people can’t usually get it. I just do that type of thing – get the different types of food in. We try to work in a family environment. Treat them how you’d like to be treated.

WC: What do you personally get from recruiting diverse staff members?

NL: I enjoy it. We’ve been overseas ourselves and I’ve found that we’re very lucky to live in Australia. Sometimes you hear about what’s going on in other places and there’s a big difference in culture. With the people I’ve got now, we sit down and talk about what products we’re going to make, what we can do to improve variety. They want input into the business.

WC: Tell me about the staff you’ve got now?

NL: Fida. She’s from Malaysia. She makes a lot of traditional types of Malaysian foods. She’s

done puddings. We class pudding as made from flour, but she puts cheese in hers. She does a lot of stuff with pineapple. She just gets a lot more variety out of less material. Fida’s husband, Eddie, jumps in to help. In the last two or three years we’ve found it very hard to get any applicants at all. But previously we’ve had Irish and Swedish workers. Different nationalities bring different ideas, different types

of food. I know Eddie and Fida’s minds have been blown with the natural resources we can grow.

WC: Do you help anyone with visa requirements?

NL: Yeah, we’re doing that now. We’re trying to get more staff but I’m finding it’s getting very, very hard. I’ve been to my local and federal members about it. I think the government should make some type of new visa for rural areas – to sweeten it up a bit more. There is some stigma attached to coming here. We’re right out – it’s nine hours from Brisbane. And in nine hours you could be five or six counties away. Noni McCarthy who manages the Regional Partnership Project up here has been fantastic.

WC: And what’s been the response from the politicians?

NL: They both agree, but they can’t do much. But they both agree there should be some type of deal done. And this is not just Queensland but the whole of Australia. These rural towns are dying off slowly and people from other countries are wanting to come to Australia with their families. They’ll
bring more children to the schools. A lot of the little schools are gradually dying by a thousand cuts because people are moving back to metropolitan areas. We’ve got everything you need. People could come here from places like Ukraine and boost the towns, but the government seems to want to leave them in the metropolitan areas. I would think if more people came here, they’d decide to stay here. I would.

WC: Do you have the best beef pie in rural Queensland?

NL: We’ve had people ringing us from Melbourne and Sydney and people coming in raving over our pies and apple turnovers. Yeah, I’d like to think we do.