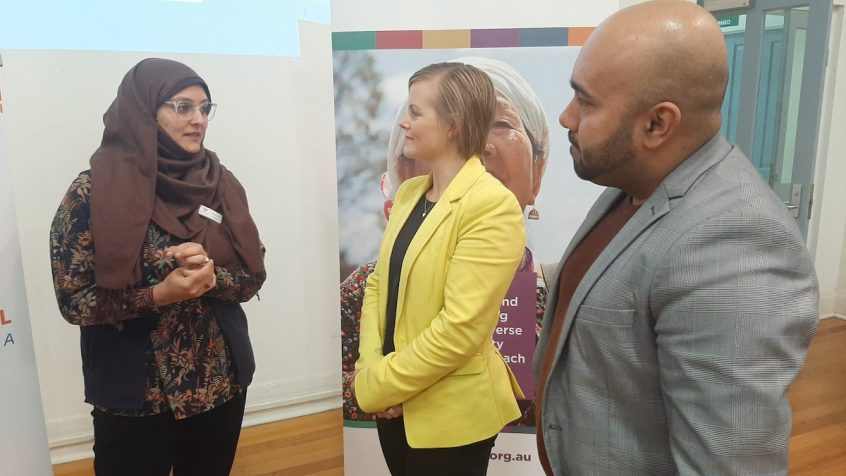 As part of a push to ensure elected members of Glenorchy City Council reflect the diversity of the community, Multicultural Council of Tasmania (MCoT) and the Migrant Resource Centre (MRC) partnered with the council to run an information session with the Mayor, Bec Thomas and council’s General Manager, Tony McMullen.

If local government truly is the level of government that is closest to the people, the diversity of the community should be reflected in council chamber. This will lead to strong and effective councils who best understand community needs and aspirations. Across Australia it is less common to see a council with true community representation and many factors contribute to this, including the fact that many people from diverse backgrounds don’t feel equipped with the tools and information they need to stand for election.

Almost one quarter of Glenorchy residents were born overseas, and over 5% identify as Aboriginal or Torres Strait Islander, yet that rich diversity has not yet been reflected in council leadership. To ensure people have every opportunity to understand the ins and outs of local government elections, council partnered with MCoT and MRC to run a session with Mayor Bec Thomas and General Manager Tony McMullen.

Glenorchy City Council Mayor understands the importance of such an initiative. ‘Glenorchy City Council is rich with cultural diversity and proud to be part of the Welcoming Cities Network. We want to see a diverse range of people participating in the activities of local government and this session provided a great opportunity for people from all cultural backgrounds to learn about our local government sector, the role of elected members, how to stand as a candidate and eligibility to vote.’

She said the session was successful, with lots of engagement from the participants. ‘I am confident that ongoing conversations will lead to increased understanding of, interest and ultimately diversity in local government representation.’

Vicky Mahajan is a community advocate, Chair of Voice of India in Tasmania and the Secretary of Hindu Society of Tasmania. His consultancy, Achiever Education, is a one-stop support network for international students looking to study in Australia. Vicky attended the session to find out more about council initiatives and said he would love to run for local government in the future. He said that diversity is important as it strengthens society and increases livelihood. ‘Diverse communities are also good for any country’s development as the people from diverse backgrounds bring their experiences and new ideas.’ He said the session provided him with information about enrolling to vote and about running for council.  ‘It always fascinates me to know how we can make the society better and what the local councils are doing for the local community. I was amazed to know that all locals can vote and participate regardless of their visa status.’

MCoT CEO Lee Wilson also welcomes local government commitment to the importance of diversity in decision-making, but acknowledges that nationally, there are gaps to be filled. ‘There’s still a lot of work to be done when we see the statistics. Of the 124 heads of federal and state government departments, less than 2% of leaders had a non-European background.’

A simple initiative such as an information session, plus referrals to other resources that dive deeper into the process of election campaigns, helps to empower people with the confidence to go forward. Diverse representation leads to better decision-making, and Glenorchy City Council is ensuring they both know, and nurture their own communities.