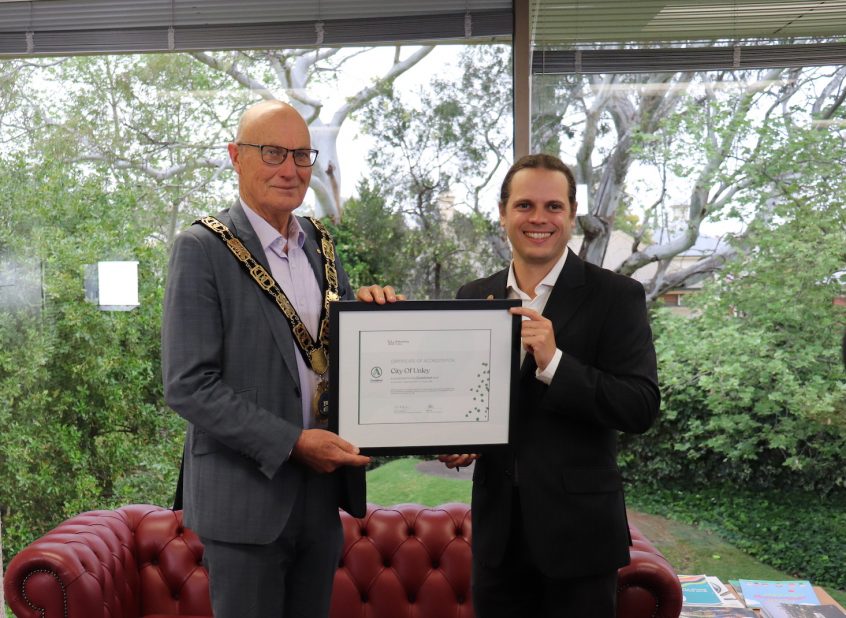 Welcoming Cities celebrates the Cities of Unley and Manningham becoming the first local governments in Australia to be accredited as an Established ‘Welcoming City’. Successful accreditation acknowledges the significant work of these councils to make their municipalities more welcoming and inclusive.

Mayor of the City of Unley, Michael Hewitson AM, says the City is seeing the benefits of benchmarking their practice against a national standard

“I am delighted that the City of Unley has joined a group of councils across Australia to be recognised officially today as a Welcoming City. We value the external assessment of our actions, not just our words. I have always seen Unley as a diverse community, and this new relationship supports learning, inclusion and diversity across all cultures and age groups, leading to greater social harmony.”

“This important accreditation we have received from Welcoming Cities today offers us a blueprint for action, standards to continue to aim for, and potential partnerships which we can access to maximise our learning, reach and impact.”

Cr Andrew Conlon, Mayor of Manningham says that the council is proud to be recognised as a leader in the Welcoming Cities program.

“Manningham is proactively creating and supporting a community where people of all cultural backgrounds are respected, valued and engaged with. The COVID-19 pandemic has reinforced the importance of clear and accessible communication about Council services and programs with all members of our community.

We’re excited that being part of the Welcoming Cities program will further strengthen these efforts and continue to build on the work that has already been done.  We are looking forward to the upcoming launch of a new Reconciliation Action Plan and the establishment of a Multicultural Advisory Committee.”

“These councils show what is possible for a local government to achieve. They have created an atmosphere of welcome through good partnerships and strong community engagement.”

“This is also a significant moment in the development of Welcoming Cities, our first accredited Welcoming Cities at the Established level lays a marker for other cities to follow.”

The Cities of Manningham and Unley follow in the footsteps of the City of Greater Bendigo who became the first accredited Welcoming City, at the Advanced level, in December last year.

Welcoming Cities recognises that this achievement by the three accredited Cities will help lead the way with six other municipalities currently working through the accreditation process.

Any Local Councils across Australia can join the growing network of Welcoming Cities it’s as simple as organising a signature and commitment from their Mayor or CEO.

Welcoming Cities is a national network of cities, shires, towns and municipalities, who are committed to an Australia where everyone can belong, contribute and thrive.  The network recognises that of all tiers of government, local councils are best placed to understand the complexity and diversity of their communities. Assessment and Accreditation as a Welcoming City allows councils to benchmark progress and identify gaps in their welcoming and inclusion practice.

Learn more about the Welcoming Cities network and the accreditation process.

The City is taking steps to recognise and engage with local Indigenous communities through a Reconciliation Statement written with the Kaurna Elders and with plans to develop a Reconciliation Action Plan within the next five years. They also run events during Reconciliation Week and have a strong focus on sharing stories with young people through library programs.

The City of Unley demonstrates leadership in advancing a welcoming culture, underpinned by a Cultural Plan that spans from 2021 to 2026. This plan outlines clear, actionable steps to encourage and recognise cultural diversity, such as the implementation of the ‘My Journey, My Unley’ program of presentations and exhibitions.

Further information on the City of Unley

Some Initiatives undertaken by the City of Unley include:

The City is clearly taking steps to recognise and engage with local Indigenous communities through the plan to establish an Innovate Reconciliation Action Plan, formal acknowledgement of country, and several interagency meetings to advocate and provide support at a policy level.

The City demonstrates leadership in advancing a welcoming culture, underpinned by clear support for the council staff internally through the training and internal working groups. This becomes complete in external campaigns, including the ‘Community Spirit Campaign’ and the ‘Far Flung Exhibition’.

Further information on the City of Manningham

Some initiatives undertaken by the City include: